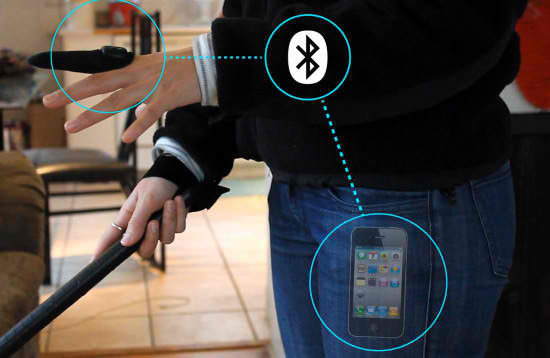 Apple an amazing concept from designer Erik Hedberg and Zach Bennet. Well they suppose to design a device which would have embedded optical scanner in a glove’s finger tip (just as you can see from the image), which would help in every possible way to Blind People. Well, The geeky concept device is titled Thimble which will hopefully help blind people though.

Well, the embedded optical scanner in the glove’s finger tip would translate paper text into Braille messages. The Thimble utilize the iPhone integration via Bluetooth that pipes the connection to Internet to deliver news and confirm the current location via Braille messages transmitted through the Thimble’s sensor-laced fingertip.

Well, this is however till the time a concept though, but it is really needed if we want they should enjoy their lives every moment as possible.

After seeing the concept video from below you will come to know about in which possible ways the device can be helpful to them.

Thimble – There’s a Thing for That from two times three on Vimeo.