Design and Simulation of Half Wave Rectifier on MATLAB

One of the first and most widely used application of power electronic devices have been in rectification. Rectification refers to the process of converting an ac voltage or current source to dc voltage and current. Rectifiers specially refer to power electronic converters where the electrical power flows from the ac side to the dc side. In many situations the same converter circuit may carry electrical power from the dc side to the ac side where upon they are referred to as inverters. We will be Designing and Simulating single phase half wave Rectifier; commonly used rectifier circuits supplying different types of loads (resistive, inductive, capacitive, back emf type) will be presented.

Single phase rectifiers are extensively used in a number of power electronic based converters. In most cases they are used to provide an intermediate unregulated dc voltage source which is further processed to obtain a regulated dc or ac output. They have, in general, been proved to be efficient.

Objectives of the Project:

Points of interest in the analysis will be.

•   Waveforms and characteristic values (average, RMS etc) of the rectified voltage and current.

•   Influence of the load type on the rectified voltage and current. 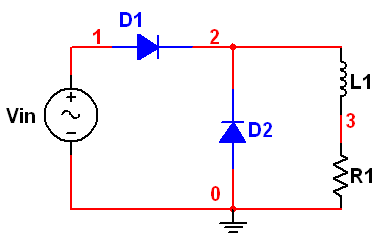 An expression for the current through the load can be obtained as shown below. It can be assumed that the load current flows all the time. In other words, the load current is continuous. When diode D1 conducts, the driving function for the differential equation is the sinusoidal function defining the source voltage. During the period defined by pi < wt < 2pi, diode D1 blocks current and acts as an open switch. On the other hand, diode D2 conducts during this period, the driving function can be set to be zero volts. For 0 < wt <pi, the equation (1) shown below applies. 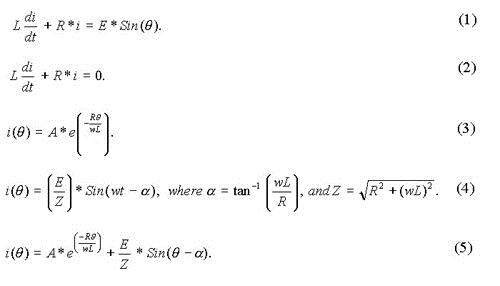 The difference in solution is in how the constant A in complementary integral is evaluated. In the case of the circuit without free-wheeling diode, i(0) = 0, since the current starts building up from zero at the start of every positive half-cycle. On the other hand, the current-flow is continuous when the circuit contains a free-wheeling diode also. Since the input to the RL circuit is a periodic half-sinusoid function, we expect that the response of the circuit should also be periodic. That means, the current through the load is periodic. It means that i(0) = i(2).

%DESIGN AND IMPLEMENTATION OF HALF WAVE RECTIFIER

disp(‘3: THE PERCENTAGE RECTIFICATION RATIO OF THE RECTIFIER…’);

disp(‘4: The Effective Value Of AC Componenet of Output Voltage is…’);

disp(‘7: The Transformer Utilization Factor is…’);

1: The Average DC Power is…

2: The Average AC Power is…

3: The Efficiency Of Rectifier is…

4: The Effective Value Of AC Componenet of Output Voltage is…

6: The Ripple Factor is…

7: The Transformer Utilization Factor is…

8: The Displacement Factor is…

9: The Harmonic Factor is…

The Voltage waveform at output or at the cathodes of both the diodes: 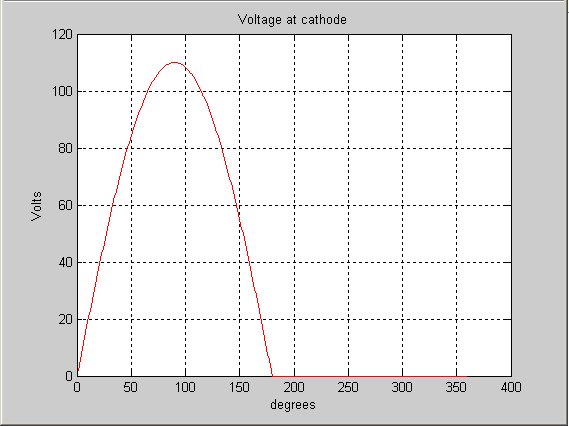 The current waveform at output or Load current: 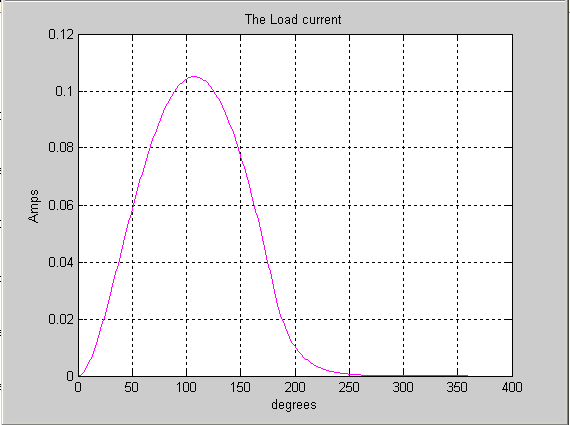 The voltage waveform across the inductor: 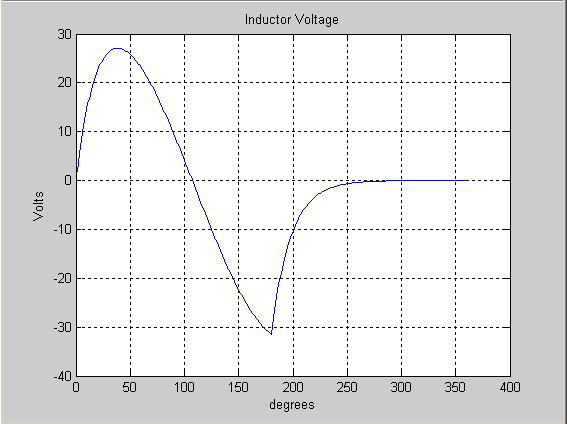 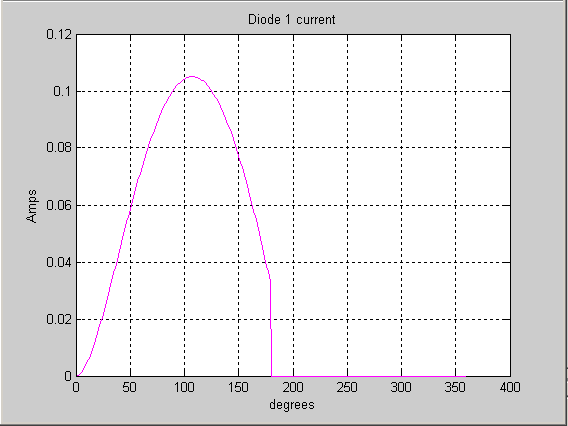 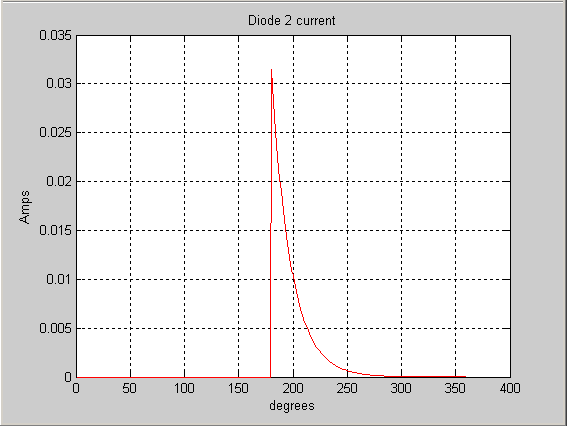 Following is the Matlab Simulink Implementation in time domain: 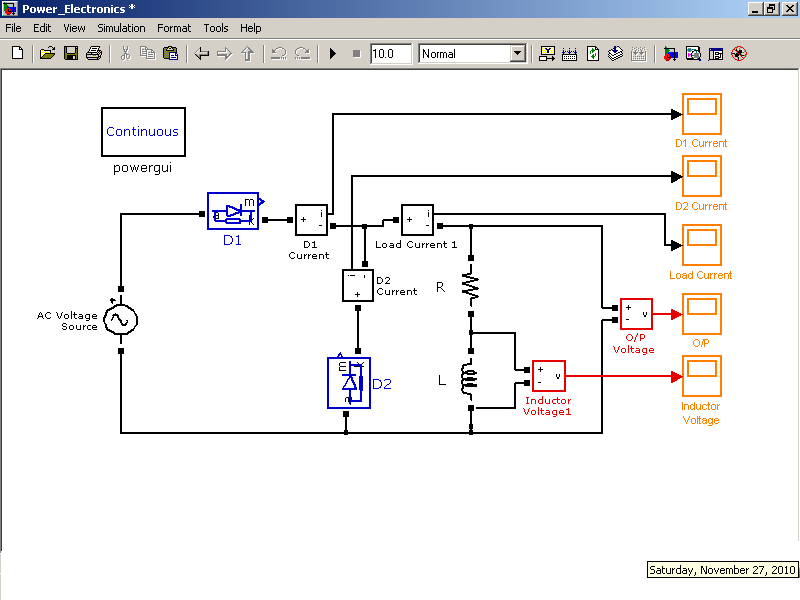 Following is the Matlab Simulink Implementation in Frequency domain: 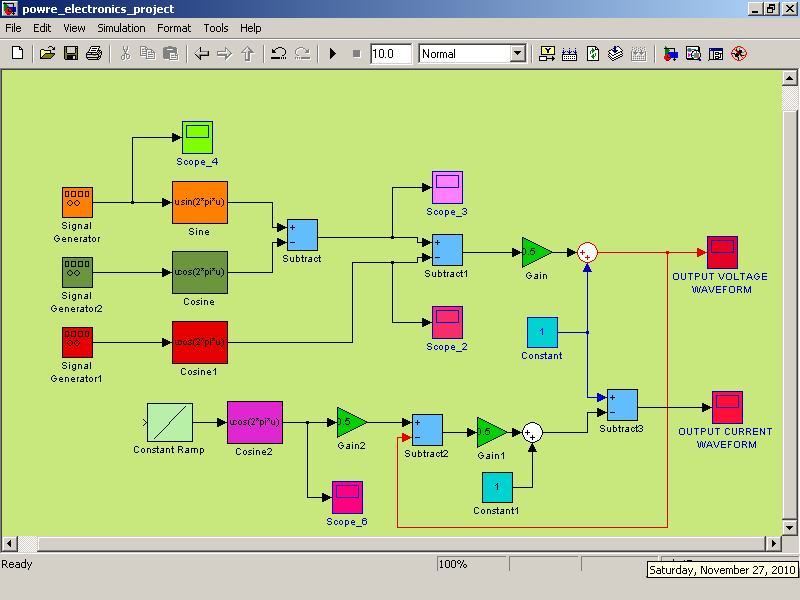 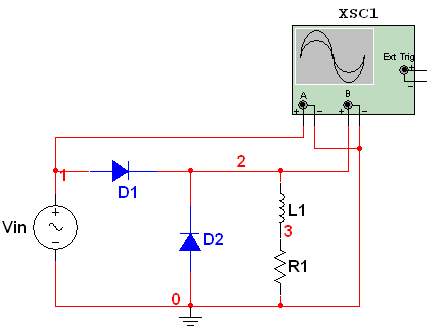 The waveform of voltage at the Input

The waveform of voltage at the cathode of both diodes i.e. Output voltage

The waveform of voltage across the inductor